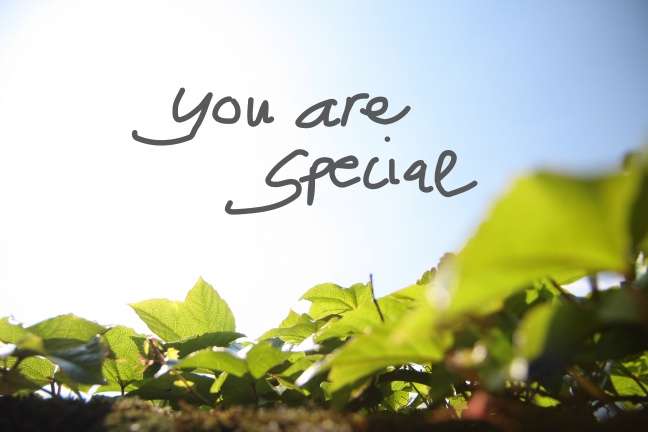 Max Lucado’s story You are special has spoken to me a lot since I discovered it recently. If you aren’t familiar with it yet, you can watch it in the form of this eight-minute video.

The story illustrates how we tend to evaluate each other (and ourselves) on the basis of performance, distributing each other “golden stars and grey dots” depending on how well we do. These marks are like stickers as they stick on us.

In my experience – and in Lucado’s too as it seems – this has some significant downsides. On the one hand, a constant pressure to earn ‘good marks’ to feel worthy makes one fear failure, which in turn makes failure even more likely than it would otherwise be. And it’s definitely not nice to get gray dots…

I sometimes experienced this pattern back in the days when I was actively playing the oboe and from time to time performing either alone, with accompaniment, or as part of an orchestra or a band. For my part, rehearsals tended to go better than gigs or concerts because I was scared of making mistakes in public. Thankfully, the last time I played the instrument two years ago in two lovely weddings, I made a conscious effort to adapt a different approach to performing, thinking of it as a means of serving the people for whom I was playing. This made the music flow in a new way while I was genuinely enjoying the situation.

On the other hand, even if I succeeded in some aspects, I might feel I would need to keep up the good track record. This is another way of being shackled by merit.

For instance, I’ve heard many times from people who were doing well at school how they had been thinking to study X (something they were interested in) but ended up choosing Y (something more appreciated in society and allowing them to pursuit more prominent or stable jobs) mainly because they could do that. Later on, they nevertheless felt they wanted to change their field of study or work because their hearts hadn’t been involved in the first choice or because some increasingly disturbing features of Y were wearing them out.

Therefore, when you stop to contemplate the trading of ‘stickers’ for a moment, you might say to ourselves it is not right. And it isn’t. Though we tend to live our lives and evaluate others as if we all were human doings, we were made human beings in the first place. So, we need to learn how to be first, and then do what we’re called to do, out of freedom and love.

The question how we can regain our intended nature as human beings and get rid of the mark earning mindset is interesting. In Lucado’s story, there is only one character, Lucia, who doesn’t have any stickers. She seems happy. When another character, Punchinello, an entirely dotted bloke, asks her how she does that, she replies that the others keep giving her stickers but the they don’t stick to her because she spends time with her Maker.

This is a powerful picture of the effect of entering a relationship with God. When we start spending time with Him, getting to know and trust Him, His good news start to sink in: we matter because He made us (= not because of our performance). And because He loves us, He has served us by making us worthy to spend eternity with Himself. How? Through cleansing us from all our wrongs by the death and resurrection of Jesus, His only son.

When we are being served by Jesus in this way, our action begins to be driven by a new motivation. We start to see little by little that our spiritual and natural talents can be used with joy for the benefit and enjoyment of other people, rather than as building blocks of our self esteem which is being built up by God himself. However, our hearts change slowly, and getting rid of the sticker mindset is a lifelong commitment. It requires prioritizing Jesus over everyone and everything else, remaining faithful to Him. For this, we need to be fortified by the Bible and prayer.

Yet, just like Lucado’s story illustrates, the stickers will fall of one by one, as we follow Lucia’s advice and stay in God’s company. And one day, they all will be gone.